Port of Spain, December 7 2022: After two and a half years, MusicTT’s Live Music District (LMD) returns with an event to rival all past LMD signature events. Saturday 3rd December was a momentous time for CreativeTT as it marked the day when all its subsidiary companies, MusicTT, FilmTT and FashionTT united for LMD’s Christmas at NAPA. The event was free to the public and incorporated elements from all three sectors: pan, parang, film screenings, Director talks and a fashion district complete with a fashion parade. 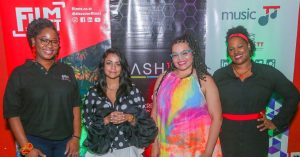 The event commenced with a brief opening remark by CreativeTT’s Marketing and Communications Manager, Josanne Lord, who stressed the significance of the moment: “This is the very first event where MusicTT, FilmTT, and FashionTT have come together as CreativeTT to bring you this wonderful, spectacular treat. Christmas at NAPA was brought to you by the Live Music District – there will be films, there will be fashion and, of course, there will be music!”

FilmTT’s General Manager, Leslie Ann Wills-Caton, started the evening’s activities by introducing the five film shorts that were screened: Jacques Pot (coming out of one of FilmTT’s very own capacity development projects); Artist Nation; two episodes of Mas Prep: Blue Devils and Moko Jumbie; and PB and the Buck (an animation). The audience got the opportunity to meet with two of the filmmakers, Artist Nation’s Nigel Thompson and Jacques Pot’s Steven M. Taylor. Also presented were the young actors from Jacques Pot, 7-year-old Kai Alexander and 8-year-old Kristen Olivia Wilson.

FashionTT’s fashion parade was also a hit. The audience snapped endless photos as the train of models strutted among them wearing garment and accessory pieces from designers such as Exclusively Abstract, Andrew Ramroop Tailoring Standards (Arts) Ltd, Kuttage Accessories, Bikini Heatz, Aya Styler and Decollete by Natalie Howe, to name a few. The public was able to purchase items from the designers as the fashion district was accessible during the entire event. Also part of the Fashion District was Angostura’s cocktail station which was a huge winner for the audience. “FashionTT was indeed delighted to be a part of this LMD Christmas event which provided our designers within the Value Chain Investment Programme (VCIP) an opportunity to showcase and sell their goods. We would like to especially thank Angostura Limited for their support via the cocktail station in the district and Fashion Impresario, Richard Young, for orchestrating the fashion parade.” – Lisa-Marie Daniel, General Manager, FashionTT.

The musical aspect of the LMD event was a spectacular one. Soloists Neisha Guy and Aaron Ifill serenaded the audience with their own versions of traditional Christmas songs. The Parang segment, with performances by the St. Joseph’s Convent Jr. Parang Ensemble and Los Alumnos de San Juan, had the audience getting out of their seats and singing along. Opening the steel band acts for the evening was the energetic NGC Couva Joylanders.

Christmas at NAPA ended on a high note with a memorable performance by the HADCO Phase II Pan Groove, led by the renowned Dr. Len “Boogsie” Sharpe. Senator the Honourable Paula Gopee-Scoon, Minister of Trade and Industry, who was also in attendance, was all smiles as she stood among the crowd surrounding the band. After the last note was played, the audience erupted with applause for an event well executed. 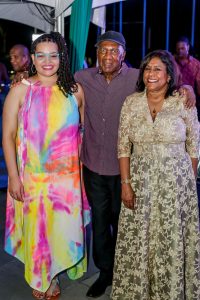 “Finally, CreativeTT’s first joint event. Togetherness and unity create a stronger voice and MusicTT was particularly happy to share the spotlight with our sister companies, FilmTT and FashionTT. We all contributed to an event that provided an opportunity to showcase each of the sectors’ talent. We are grateful to all the performers, designers and filmmakers who took part. We would also like to thank Vibes Promotions and NAPA for contributing to the success of Christmas at NAPA.” – Melissa Jimenez, General Manager, MusicTT.

For more information on CreativeTT and its subs, visit www.creativett.co.tt. To keep up to date LMD events and other MusicTT news, follow @musicoftt on Instagram and Facebook.