We had a brief conversation with producer Richard Chin Fatt on the topic of gun safety on set. Richard has been working in the film and television industry in and out of Trinidad for 30+ years as a Co-Producer, Editor, Production Consultant, and Cameraman. His extensive background in project management and production coordination is an asset in the areas of budget maximization and project efficiency.
He was thrown headfirst into movie-making on the set of Men of Gray 2 – Flight on the ibis. With that experience under his belt, he went on to become co-producer on the feature film Backlash and was consulting producer on the award-winning film ‘’Contract Killers.” We spoke to Richard about the unfortunate shooting of cinematographer Halyna Hutchins on the set of Alec Baldwin’s new movie. This incident has raised many questions and has caused crews to walk-off sets in protest of set conditions especially regarding safety and the options of VFX to simulate scenes with gunfire.

What are your thoughts on what happened?

It is quite interesting because, they are now finding out that the gun was loaded with live ammo, a live round. Everything is supposed to be checked, double-checked, and triple-checked by the armorer. The buck stops with him, at this point, it is speculation as to what’s happening, but it’s unfortunate.

I really cannot say much about that until more information comes out, but it’s quite interesting that there was live ammo in it.

How possible is it that something like this can happen here in Trinidad?

It is possible. It all depends on who is handling your firearms and so on because we are very limited with prop guns and prop weapons here. All the films that I have worked on with firearms have always been either assigned through the army or the police service. Additionally, there is always someone that is assigned to us when we are handed weapons.

At the moment, we cannot bring in prop guns. So, it means that to use a weapon, you need to get it from either the army or the police service, which we have done numerous times.

So, to answer your question shortly, it can happen but because we are dealing with the police, and the army, it is less likely to happen. 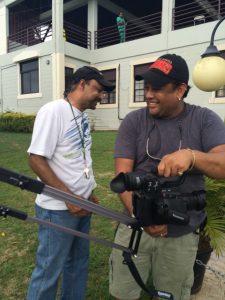 What are the various safety requirements, on set, that aids in avoiding something like this happening?

The armorer should be doing what they are supposed to be doing, checking, double-checking and triple-checking, making sure all the firearms are in safe mode.

Number one is that you should never have live rounds, there is absolutely no reason to have live rounds on the set. So, from that perspective, it can happen, like in the case of Brandon Lee, Bruce Lee’s son, when he died, he was just mucking around.

You still get a very slight projectile coming out of the firearm, because it is gunpowder. Sometimes we do it with CGI, but a lot of times, for effect and all that, it is done on set, with blanks.

So, at the end of the day, it begins and ends with the armorer, the producers just need to hire the best person possible for that job. 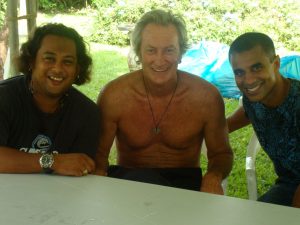 Do we have enough in place to avoid it?

To be honest, we have nothing in place, it is really up to the producer on the set. The fact that we have to go through the police or the army, means that whatever protocols they have with firearms, would be implemented on set.

It is a tough question to answer, whether or not we have enough, but if you want to look at it, the police service and army are very strict when it comes to firearms, so yes, I guess so. Otherwise, we have nothing really in a place like that, to deal with that. 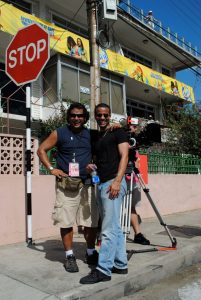 The procedures to shoot these scenes?

As you know, when we shot films in the early 90s, mid-’90s, Flight of the Ibis, Backlash, and Contract Killers all of which had weapons, the procedures basically starts with you guys, FilmTT. FilmTT would organize meetings with the relevant authorities, be it the Coast Guard, Defence Force, or Police.

We show them or give them excerpts of the scenes, so they are fully aware of what they’re getting into. The Protective Services have always been very accommodating to us, once you adhered to their protocols.

They are given a script breakdown of the different scenes, different days and they will assign a liaison. Which, if you want to call it for want of a better word, the armorer because it is the police or defence forces. What they do in essence is, bring the firearms on set, and what we do on our side, as producers, as well as the DP, the camera department, and so on, once the firearms are on set, is check the chamber.

I personally do this when I am shooting or I am dealing with any firearm that is around me, I want to check the chamber; to make sure the chamber is empty and the cartridges are empty, and there is nothing in there. I do not take it for granted, and once I’m comfortable then we move on.

Those are some of the procedures we have had, and thankfully, we have never had an issue with firearms or with any kind of explosives. At the end of the day, it comes back down to doing the right thing, going through the right procedures.